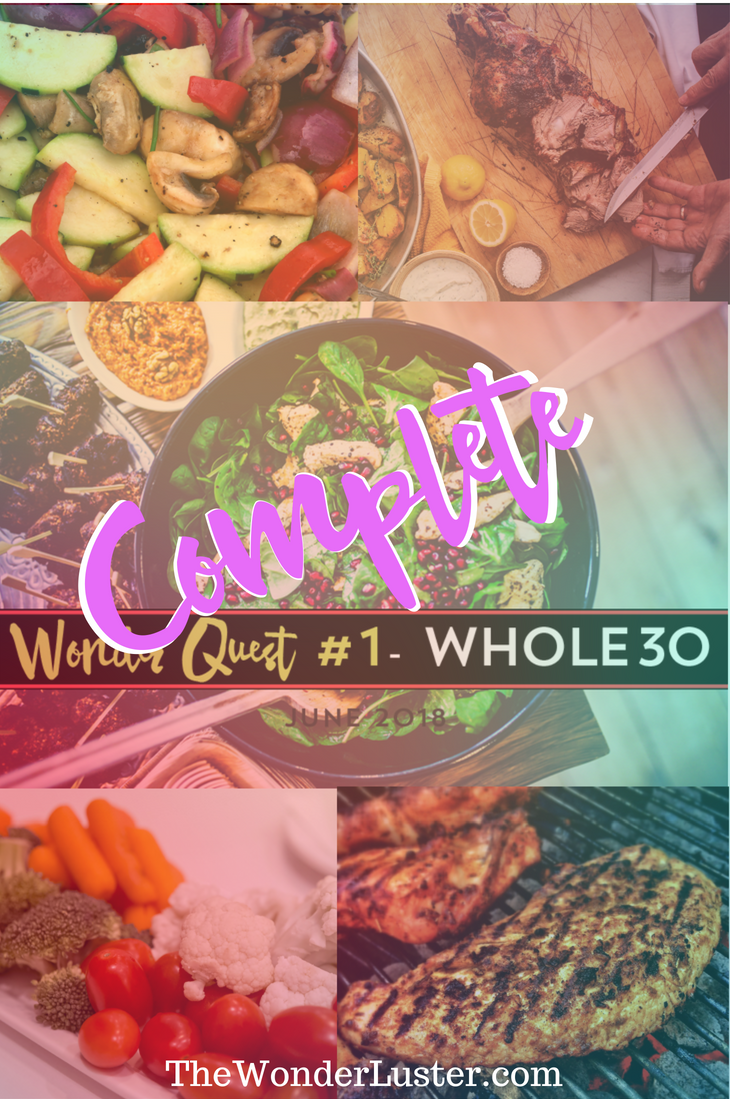 So, my first Wonder Quest was to embark on 30 days of the Whole30 Program which is an elimination diet to which you do not eat grains, added sugars, dairy, legumes or really, anything fun.  The goal is to reset your sugar cravings, clear out your system to see how food impacts your energy levels and digestion, and as a result, you might just lose weight in the process.

I reluctantly got on the Whole30 train because I had been dealing with some health issues that became too persistent to ignore.  Extreme bouts of fatigue, trouble concentrating, low grade joint paint and muscle aches, and did I mention that I gained 9 lbs. since January?  Yes the diet of cheese, bread and wine in Paris might have had something to do with it- but alas, I was flummoxed.  If this is getting older, I’m not going to fare very well.

So, I decided to give the crazy elimination diet a try.  I also had some blood work done before starting the Whole 30 and my doctor confirmed that my thyroid levels were off, way off.  It could be a blip- so she advised I come back and test in a month- so, with that, my experiment in eating began. 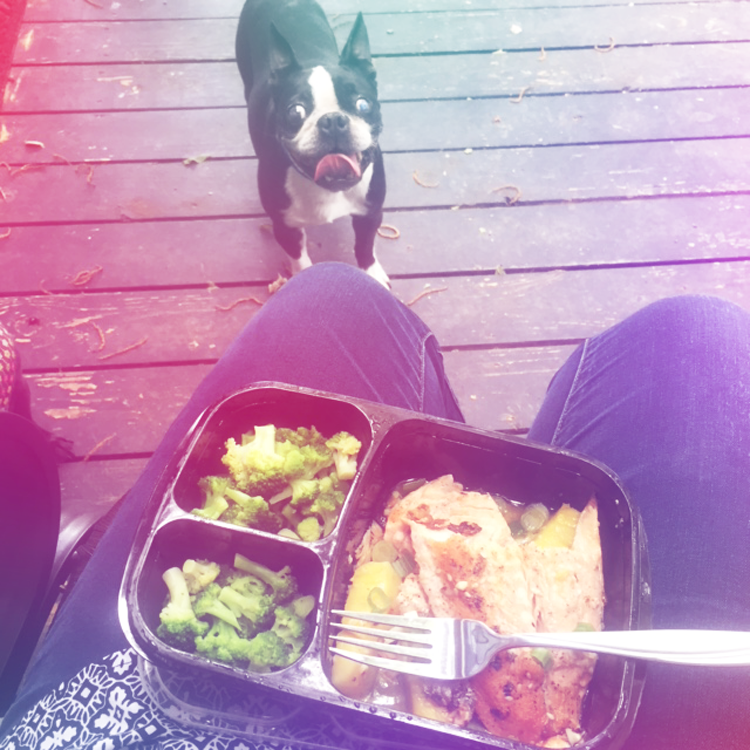 The First Week Was Like Getting Punched In The Face

The first day was mentally exhausting.  I kept reaching for the gum, the crackers, the chocolate, and knowing I couldn’t have any of it, my brain got tired of the constant disappointment.  It was stressful. I took my lunch home to go sit with the dogs.  I was stressed out and I had no way to cope with the feels I was feeling, so dogs were my only respite.  I ate my salmon and broccoli and was stressed about feeling stressed.

It would be a sign of things to come- you really have no idea how much you depend on food for all of your emotional needs until you see yourself reaching for gum to stress chew no less than 30 times in a day.
After the first day, I went back to the store and tried to expand my menu beyond my prepared bento boxes of salmon/veggies and hard boiled eggs.  Pretty much everything I used to eat was off limits-  bags of salad with dressing (dairy, added sugar), sushi (rice), sandwiches (bread), pasta (gluten, sugar in the sauce), string cheese (dairy).  You get really angry when you can’t eat the things you like, and even the things you thought weren’t so bad, still have gobs of added sugar.

Honestly, that was the only thing that kept me going that first week- the sheer rage of finding sugar (which is off limits) in everything from pasta sauce, to almond butter to salad dressing and even bacon.

Yes, good luck finding bacon or sausage without sugar. You will find it, but it will cost you $1-2 more than the 20 other choices you have.  Rage will keep you going.

I Felt Sick For Nearly the Entire 30 Days

I was warned I would feel awful during Whole30. I was warned I would have headaches and fatigue, and that if I did indeed have an autoimmune disorder, I would feel worse than most.  This was all true.  Aaron felt like a champion on day 4, 5, and 6.  I felt tired, achy, grumpy, exhausted and my joints literally hurt like I was an old lady with arthritis.

I’m going to be honest- I don’t know how people kick heroin. I gave up sugar and my body went into shock.  I was literally sick and didn’t even have a “good” day until literally the last 2-3 days of Whole30.  People who kick drugs, kudos to you.

After Whole30, I went back for a follow up blood test, and confirmed my suspicions.  I do have an autoimmune disorder- Hashimoto’s Thryroiditis.  It’s a super fun term for when your immune system is trippin’ out and attacks your thyroid until it eventually kills your thyroid.  As it starts to fail, you end up with long term aches and pains, weight gain, sensitivity to cold, fatigue and trouble with concentration and memory. Check, check and check.

Another fun thing is that your autoimmune symptoms heighten with stress.  What better way to send your body into stress than to withdraw from a daily diet of added sugar.  Theory confirmed.

I felt literally sick the first two weeks of Whole30 but didn’t stabilize until the very end. It made my autoimmune disorder rear its ugly head on top of feeling like I just kicked a heroin habit.  I was thinking sick, repetitive thoughts for sugar, wine and cheese…my favorites.  Thinking of sourdough bread made me break out in a sweat.  It is not lost on me that I was fiendin’ for sugar, not for cocaine and that knowledge keeps me very reluctant to go back to added sugar post Whole30. 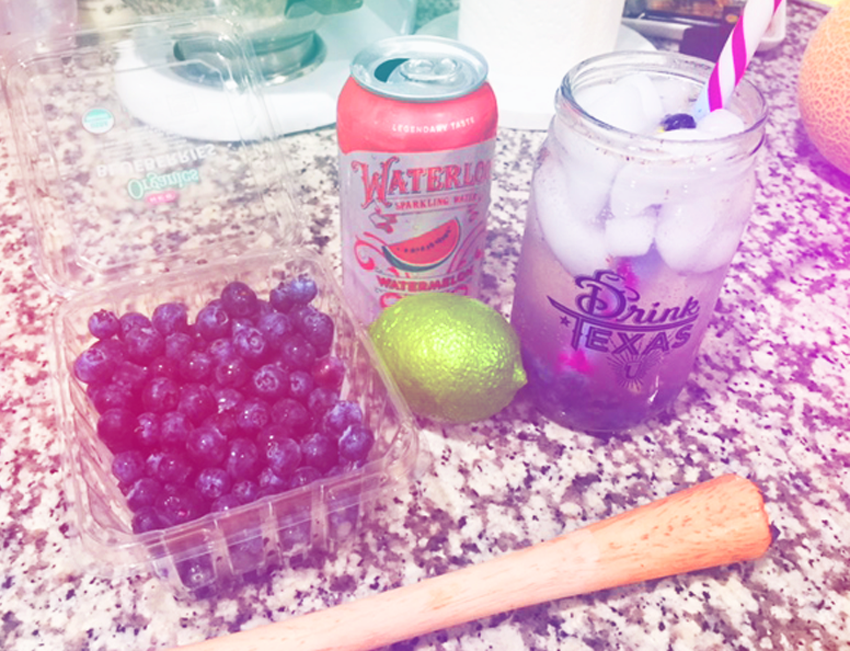 Drinking socially takes on a new meaning when you can only have mocktails for 30 days.  Booze was what I missed the most.

My “Normal” Relationship With Food Was Really Toxic

While my “average American diet” was pretty typical – a lot of wine, a lot of dairy and a lot of gluten, the reasons for my choices and the quantities I reactively consumed wasn’t average.  While I don’t self-sooth with shopping, sex, drugs or drama, I do seem to see food as an extension of my psyche.

In the 30 day walk in the desert that is Whole 30, I started to realize that I used food for everything.  Bored?  Eat crackers.  Stressed? You deserve some sweets.  Long day?  It’s time for wine.  Great week?  Beer me!  Bad week? Beer me!  Not really hungry? Might as well eat!  This was an everyday thing.

Coping with life was solely done with food.  Nights were met with snacking, ice cream or wine.  Friday nights with a cold cocktail to kick off the weekend.  Stressful days at work were met with a half box of Cheez-its inhaled on auto-pilot.  Now, there is absolutely nothing wrong with snacks, ice cream, wine or Cheez-Its- but for me, a lot of my eating was done without recognition for how I felt before, during or after eating.  My hand-to-mouth fixation was on autopilot.

During the course of Whole30, I had to figure out ways to feel all the feels in a way that didn’t involve food.  I had to change my habits from a movement of hand-to-face to reading inspirational books, going for long walks, snuggling my dogs extra long, taking hot baths, and sitting with the discomfort of not having the one thing I wanted to stop feeling the intensity of my feelings: food.

I drank a lot of tea and did a lot of deep breathing.  It was really astounding how much “dealing” with life I had to do when my habits became conscious. We are emotional human beings- if we tell ourselves otherwise, we likely hiding behind something.

I Hate To Admit It, But Life Is Different After Whole30

I really wanted to say that Whole30 was stupid and that its cult of followers are wrong- but after the pain, I get it.  I lost 9 lbs, and my jelly rolls of bloat smoothed out.  I feel less frumpy and lumpy, and while I was diagnosed with an autoimmune disorder and the road is long ahead, I feel like I’m finally listening to something I’ve been ignoring for a long time- what I eat is messing with me.

Food matters, it really does.  Most of us aren’t paying enough attention about it.

Food was making me bloated and sluggish, but it was also a lovely salve to answer my emotional highs and lows.  When I was diagnosed with Hashimoto’s, my doctor never once asked what I was eating, and that really bothered me.

Her answer, mirrored by many physicians who treat this disease, is to do nothing until my thyroid fails on its own.  Really, that’s what she said- when it gets really bad, I can start medications to assist my failed thyroid.  Usually though, this means that your hormones are so out of whack that you’re constantly exhausted, and likely depressed.  The thought of waiting until I’m depressed to be proactive about my health, is quite, well- depressing.

So, What Now? You’ve Got An Autoimmune Disorder And Not Much Else.

Long story short, I don’t want to sit around and wait to feel like permanent crap on a cracker, and I firmly believe there’s more to my illness than hormone replacement can solve.  Why is my immune system out of whack?  Likely, it’s hereditary- but surely more can be done to help my overall wellness than a pill can provide.  Truly, the system as a whole needs some work- and I’m still unpacking my relationship with food, exercise (lack of it) and being attentive to stress levels that can make an already aggravated immune system go into a frenzy.

Truly, there’s a lot I’ve woken up to, that I no longer can ignore.  I absolutely will go on thyroid aiding medications when my Hashimoto’s calls for it- but for now, I still and wait and manage what I can manage (the rest of me) until that happens.

I started reading that diet can positively impact your autoimmune issues, so while my Whole30 has officially ended as of this writing, I’ve decided to keep on- especially because it may be a few more months before I can get medications to help treat my ongoing symptoms.  I’ve incorporated wine and some added sugars and dairy back into my diet- but am avoiding gluten and sticking mainly to a whole foods rotation that focuses on protein, veggies and fruit with minimal processing.

I’m not out of the woods, but I’ve learned so much about my body, my habits and I’m still learning to feel all the feels, with or without food.

« Women Traveling Solo: Why I Recommend It
How To Best Utilize Airport Layovers »